CPJ’s Gwen Ifill Press Freedom Award is presented annually to an individual who has shown extraordinary and sustained achievement in the cause of press freedom. 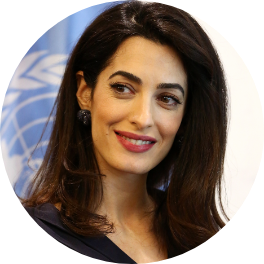 CPJ is honored to present its 2020 Gwen Ifill Press Freedom Award, for extraordinary and sustained achievement in the cause of press freedom, to lawyer Amal Clooney.

Clooney previously served as a senior advisor to Kofi Annan when he was the U.N.’s Envoy on Syria. She also served as counsel to the U.N. inquiry on the use of armed drones. She is a member of the
U.K.’s team of experts on preventing sexual violence in conflict zones, and she is on the U.K. attorney general’s expert panel on public international law.

Clooney is a strong advocate for press freedom and the rights of journalists. She served as international counsel for Reuters and the media organization’s journalists Wa Lone and Kyaw Soe
Oo, who were arrested in Myanmar in December 2017 and sentenced to seven years in prison under the country’s Official Secrets Act for their reporting on crimes committed against the Rohingyas by Myanmar forces. Clooney worked with CPJ on the journalists’ case and, together with Reuters and CPJ, advocated on behalf of the Reuters reporters and other journalists imprisoned around the world at the United Nations. In her remarks at the U.N., she called the journalists’ convictions and sentence
a “travesty of justice” and outlined their defense case. In May 2019, the two journalists were freed.

Prior to this, Clooney also represented award-winning Azerbaijani journalist Khadija Ismayilova, who was persecuted by Azerbaijani authorities for years. Ismayilova was jailed in December 2014 and
sentenced to seven-and-a-half years in prison on charges of tax evasion and embezzlement, allegations that CPJ believed were in retaliation for her reporting. For years, CPJ, too, advocated for
her freedom. Clooney represented Ismayilova before the European Court of Human Rights, securing a strong judgment in her favor. In May 2016, Ismayilova was released from prison. “Her release is a
victory for all journalists who dare to speak truth to power,” Clooney said at the time.

Clooney also represented Mohamad Fahmy, a Canadian who was one of three Al-Jazeera journalists imprisoned in Egypt in 2013. Fahmy was serving a three-year prison sentence on charges of terrorism and spreading false news. The charges spurred international condemnation, and CPJ repeatedly called for the journalists’ release. In September 2015, Fahmy was freed and on his release thanked his “remarkable and courageous” lawyer Amal Clooney.

Clooney also promotes freedom of speech and journalism through the Clooney Foundation for Justice, which she co-founded with her husband George Clooney. One of their flagship initiatives, TrialWatch, monitors the trials of journalists worldwide and provides free legal representation for those in greatest need. The initiative also grades the fairness of each trial in order to rank judicial systems on a global justice index that will be used to push for systemic reform. CPJ works closely with TrialWatch on many of these cases and has supported Clooney’s calls for legal and policy
reform—including the use of sanctions against officials who silence reporters—to better protect a free press.

CPJ is deeply grateful to Clooney for her contributions to the cause of press freedom. Clooney has been a strong supporter of our advocacy work in recent years and has taken up CPJ’s call for
governments to provide emergency visas to journalists in distress. She is currently representing Maria Ressa, CPJ’s 2018 Gwen Ifill award winner, who has been convicted of cyber libel, a criminal
offense, in the Philippines.

CPJ’s Gwen Ifill Press Freedom Award is presented annually to an individual who has shown extraordinary and sustained achievement in the cause of press freedom. 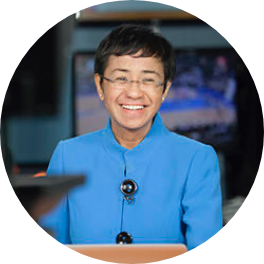 Maria Ressa is the founder, CEO, and executive editor of Rappler, a Philippine news website created in 2012 that is renowned for its critical coverage of President Rodrigo Duterte’s controversial policies and actions.

Rappler has often been targeted by the Philippine government. In June, she and a researcher from Rappler were convicted of cyber libel, a criminal offense. The court ordered each journalist to pay 400,000 pesos ($7,950) in fines and moral damages, and sentenced each to a minimum of six months and one day and a maximum of six years in jail. Their appeal is pending. Amal Clooney, UK barrister, is representing Ressa.

The case stemmed from a May 2012 Rappler report on a local businessman’s alleged ties to a former judge and purported links to drug and human trafficking rings, and was pursued under a cyber libel law that was enacted in September 2012, according to those news reports.

Previously, in November 2018, authorities said they had grounds to indict Ressa and Rappler for tax evasion and failure to file returns, a move CPJ condemned. In January, the Securities and Exchange Commission ordered Rappler‘s registration to be revoked. The next month, the government banned the website, which Duterte characterized as “fake news,” from covering official presidential palace events. But Rappler continues to operate, with Ressa challenging what she sees as a politicized decision by the commission that is aimed at stifling critical coverage.

In 2018, CPJ honored Ressa with the Gwen Ifill Press Freedom Award in recognition of her journalistic courage in the face of persistent official harassment.

Ressa has been a journalist in Asia for more than 30 years, most of them as CNN’s bureau chief in Manila, then Jakarta. During that time, she served as the network’s lead investigative reporter focusing on terrorism in Southeast Asia. In 2005, she took the helm of ABS-CBN News and Current Affairs, and for six years managed more than 1,000 journalists for the largest multi-platform news operation in the Philippines. Her work aimed to redefine journalism by combining traditional broadcast, new media, and mobile phone technology for social change. In 1987, Ressa helped found the independent production company Probe.

She has taught courses in politics and media for her alma mater, Princeton University, as well as in broadcasting at the University of the Philippines. Her 2012 book, “From Bin Laden to Facebook,” is part of her work as author-in-residence and senior fellow at the International Centre for Political Violence & Terrorism Research in Singapore. In 2003, she wrote “Seeds of Terror: An Eyewitness Account of Al-Qaeda’s Newest Center of Operations in Southeast Asia,” which documented the growth of Jemaah Islamiyah and its links to Al-Qaeda.

Ressa has earned multiple awards, including most recently the 2018 Golden Pen of Freedom Award from WAN-IFRA, the 2018 Knight International Journalism Award, the 2018 Free Media Pioneer Award from the International Press Institute, and the National Democratic Institute’s Democracy Award in 2017.